On August 8, 2022, the US sanctioned Tornado Cash. According to the announcement by the US Treasury, this means that “all property and interests of Tornado Cash that are in the United States or in the possession or control of US persons are blocked and must be reported to OFAC.”

In addition, “any entities that are owned, directly or indirectly, 50 percent or more by one or more blocked persons are also blocked.”

The Office of Foreign Assets Control (OFAC) of the US Treasury cited the need to enforce anti-money laundering (AML) controls on criminal users of Tornado Cash, which include North Korea and their state-sponsored hacking department known as “The Lazarus Group.”

Since launching in August 2019, Tornado Cash has received over $7.6 billion worth of Ethereum. However, research carried out by Chainalysis suggests that the majority of funds received by Tornado Cash are from legitimate sources, and many libertarians and privacy advocates have decried the actions of OFAC, considering them an infringement on free speech. 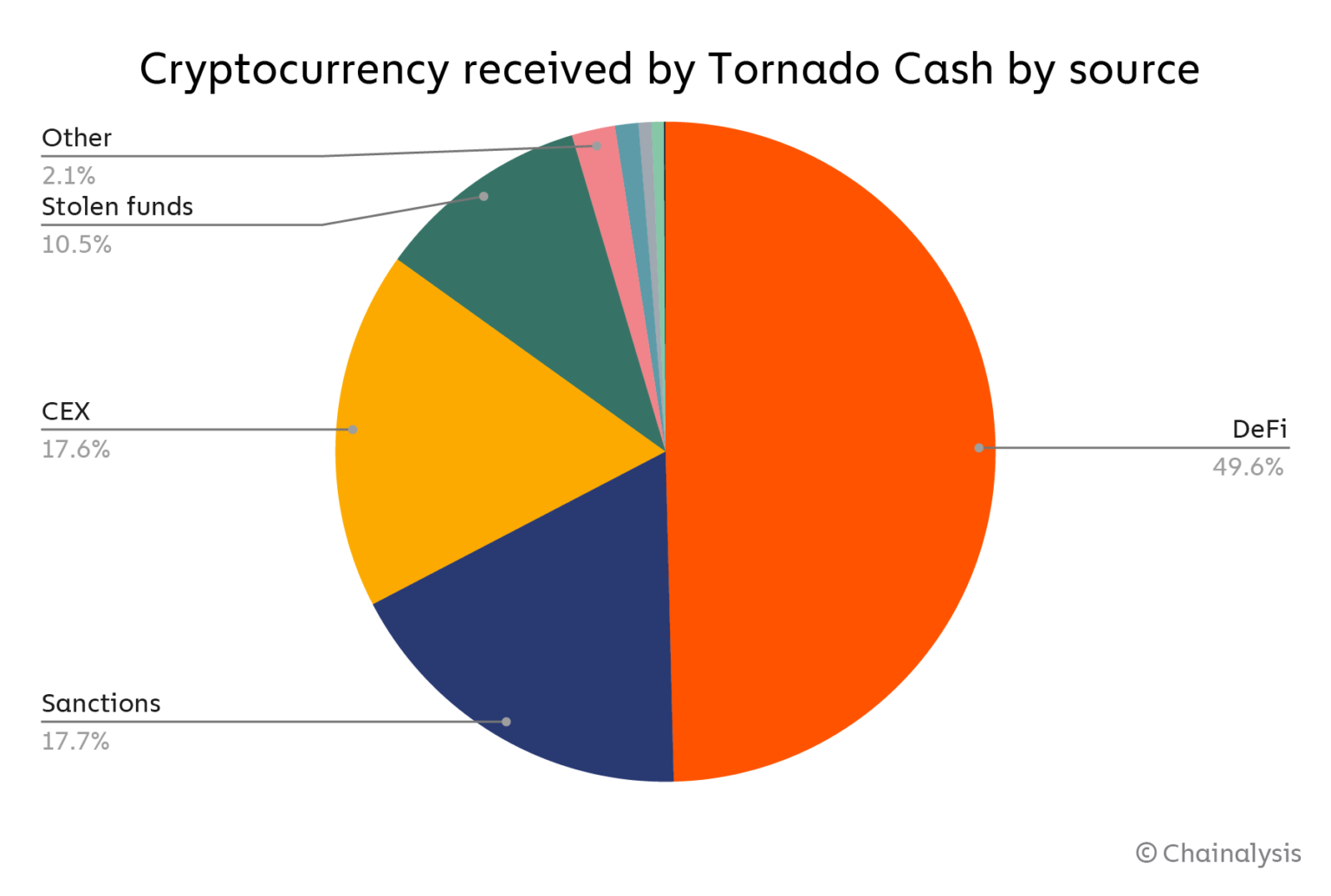 Although the majority of funds within Tornado may be from legitimate sources, the link between Tornado Cash and on-chain criminal activity is undeniable.

In its post-mortem report, blockchain security firm Slowmist estimated that Tornado Cash has mixed $2.2 billion worth of ETH during the first half of 2022.

Of the transactions that Slowmist identified to be money laundering, three-quarters of these passed through Tornado Cash. Its native token, TORN, plummeted in the wake of OFAC’s sanctions, but the impacts have also been felt offline.

Just two days after the OFAC announced its sanctions, Dutch authorities arrested developer Alexey Pertsev for his alleged role in creating Tornado Cash. It’s alleged that he facilitated money laundering through the Tornado Cash protocol and enabled the concealment of illicit cash flows.

FIOD responded to queries about the arrest of Pertsev, stating that although simply writing code can be considered free speech and isn’t illegal per se, writing code such as that of Tornado Cash, which it claims to be “for the sole purpose of committing criminal acts” is illegal.

Authorities don’t address the fact that Tornado Cash also processes legitimate funds, or that the sanctions have impacted innocent users.

Forty-six (and counting) unique cryptocurrency addresses have been included as identifiers in the sanctions. The accuracy of these inclusions has been questioned by some in the industry, as donation addresses from charitable organizations such as Gitcoin are also on the list, creating an uncertain legal situation for those who have previously donated to Tornado Cash through Gitcoin.

Gitcoin has since removed the Tornado Cash donation page, and other websites are also being forced to distance themselves from the platform.

The Tornado Cash sanctions and arrest of Alexey Pertsev have drawn criticism from a wide range of industry experts.

There are certain historical cases that may be used in the defense of Tornado Cash.

The plaintiffs in any potential court case could cite a previous counter lawsuit in which then-undergrad student Daniel J. Bernstein fought back against the Department of Justice.

The Department of Justice was attempting to force him to register as an arms dealer or obtain a license to publish his work on a data encryption algorithm called “Snuffle.”

Speaking to a related, non-Tornado Cash issue, Coinbase CEO Brian Armstrong suggested he would prefer not to block transactions to and from sanctioned addresses once Ethereum switches to a purely Proof-of-Stake (PoS) algorithm. He said he would rather end Ethereum staking on Coinbase’s platform than comply with such sanctions. However, he also suggested that a legal challenge to OFAC’s sanctions could lead to a better outcome.

In a protest meant to highlight the inaccuracy of the OFAC sanctions, one user dusted the wallets of various celebrities with “dirty” Ethereum that had been sent through Tornado Cash. The wallets belonged to high-profile individuals in the digital asset community, including Vitalik Buterin, Brian Armstrong, Jimmy Fallon, and prominent NFT artist Beeple.

This “dusting” activity forces users who never intended to use the protocol to become technically susceptible to sanctions violations. In Ethereum, as with most blockchains, recipients of funds cannot deny a funds transfer. Once someone sends money to a wallet, a recipient cannot reject it.

Circle’s CENTRE Consortium froze $100,000 in USDC from addresses listed by Treasury as Tornado Cash interactives. On-chain exchange dYdX also banned accounts with funds traced back to Tornado Cash. (dYdX then unbanned some of those accounts, saying compliance vendors had wrongly flagged them with Tornado Cash.)

The Tornado Cash case has been the highest profile case of its kind, but it isn’t without precedent. In May of 2022, OFAC brought similar sanctions onto blendr.io, a Bitcoin mixer that also received funds from the Lazarus Group.

Following these events, users report that centralized organizations such as FTX are now distancing themselves from similar privacy-preserving platforms, suggesting that they believe this crackdown will continue.

We use cookies on our website to give you the most relevant experience by remembering your preferences and repeat visits. By clicking “Accept”, you consent to the use of ALL the cookies.
SettingsACCEPT
Manage consent